At the "Core" : Strong abs, pelvic floor health and why it even matters

When I hear the term “core” it triggers the image of a hunky guy, walking out of the ocean, with 6 pack abs and a subtle hair flip. I’m talking a shirtless Mr. Darcy exiting a fancy, British lake (Colin Firth in Pride and Prejudice anyone??).

But what really makes up the core? Is it just Mr. Darcy’s well admired six pack?

Sure isn't! It’s so much more than that. 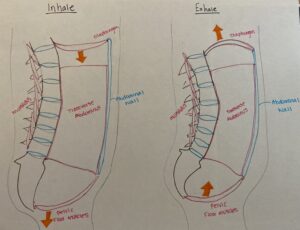 These relationships are part of the reason why it is so important to consider muscle groups in our body as part of a bigger picture. The pelvic floor, for instance, needs to be thought of in the context of this core canister and not just as an isolated muscle group.

One of the ways that we support the pelvic floor in functioning to its full potential is to consider it’s unique relationship with the diaphragm. These are the only two muscles in the human body that sit in the transverse (side to side) plane and they are co-contractors to each other. Meaning that, as you inhale, the diaphragm contracts and lowers towards the ground--making room for all that glorious air coming into your lungs. At the same time, all the other contents in your abdomen lower toward the ground and the pelvic floor lengthens (down toward the ground) as well. Then, with exhale, the diaphragm and pelvic floor automatically come back up toward your head. Returning home to their favorite, supportive, resting positions. EMG studies indicate that this is a natural pattern. It should be happening without any active thought or effort.  They also say that the pelvic floor and deep abdominal muscles are the first thing that automatically turns on in anticipation for the movement of any other part of the body (arms, legs, tush- you name it). This should happen ALL the time– even with something as simple as taking a step.

So, what goes wrong? The wonky part can come when this natural and fluid process gets interrupted. It can happen for a whole lot of reasons- repetitive trauma, pain, years of shallow breathing, gripping through the butt muscles, extra pressure down on the bottom of that pelvic floor, pregnancy, chronic constipation etc.

None of these mean you’re doing something wrong– but it’s worth considering the root behind why this automatic process may be altered. Then, you can work toward re-establishing these movement patterns.

Luckily, we’re here to help with this! So, what now? Try going back to basics with some intentional breathing strategies– 360 Breathing may be one place to start!

360 breathing is a breathing technique that works to allow for more full access to the diaphragm. If you allow the diaphragm to move and descend as fully as possible, it can encourage that full automatic response of the pelvic floor muscles and help your brain connect to those movement patterns. Remember to let your ribs move up and out like an umbrella as you inhale. Letting that diaphragm move is key- which means that a stiff back or ribs also may need to be addressed.

The goal is for these patterns to be automatic and natural.

Want to try it? Follow the link to 360 breathing here!

Lauren Van Valkenburgh graduated with a bachelor's degree in Integrative Biology from the University of California, Berkeley in 2017. She went on to get her Doctorate of Physical Therapy at Rosalind Franklin University of Medicine and Science in 2022. She has always been passionate about the intersection of pelvic health and wellness and firmly believes that everyone should be able to enjoy the activities they love without pain or fear.