The Importance of Breathing

I think it is clear that breathing is essential for life.  The benefits of a healthy breathing pattern are not always clear though.   I want to explore that area a bit more and shed some light on why breathing is linked to stress, the pelvic floor, and beyond.

Let’s first talk about the anatomy behind breathing.   Muscles involved with breathing include the diaphragm, intercostals (muscles between ribs), and a long list of accessory muscles.  There is nerve involvement and bony structures such as the ribcage that also play an important role.  There are a variety of breathing styles and people may be dominant in shoulder, abdominal, or diaphragmatic breathing.  I want to highlight the importance of 360 degree breathing and its connection to normal human function. 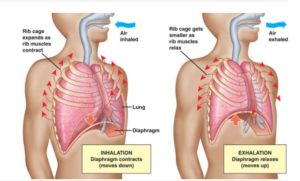 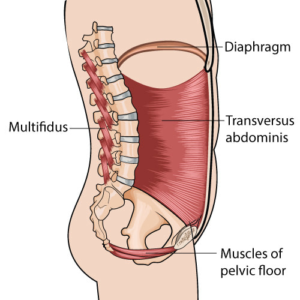 Stress:  The vagus nerve is a powerhouse!  And it just so happens to lie right underneath the diaphragm.  It is responsible for many processes including communication with the heart, lungs and digestive tract.  It also signals with the brain to assist in relaxation.  When you take a deep breath the diaphragm should contract downward and stimulate the vagus nerve.  However, if a person is more of a shoulder breather (instead of the diaphragm) the vagus nerve will not be stimulated which contributes to higher cortisol levels, more stress, and further abnormal breathing.

Pelvic floor:   When you take a breath in the goal would be to allow for the ribs to expand out in a 360 degree fashion and for some pressure to go downward onto the pelvic floor.  The pelvic floor responds by tightening in an upward fashion to allow for overall stability and balance of surrounding musculature.  When people are purely shoulder, upper chest breathers they lack that downward air flow and consequently may present with pathology in their low back, hips, or pelvic floor.

Core strength:   When breathing we want symmetrical 360 degree movement.  Envision letting your ribs expand outward, so if you feel under your ribcage and take a deep breath you should feel it move outward both in the front, side, and back of the body.  What can happen at times is that the chest or upper back may be tight so we lack that rib mobility.  Air follows the path of least resistance so it will continue downward and cause an excessive amount of belly breathing which can worsen something such as a diastasis (separation of abdominal muscle).  This also works in reverse.  So if we lack core strength the air will just naturally travel downward, again along that path of least resistance, and individuals may start to notice that their chest and upper back are feeling tight.  That is because the core needs to maintain tension so that the ribcage can properly expand during an inhalation.   If the ribcage doesn’t expand then it will affect the length of transverse abdominis and the obliques and if muscles don’t lengthen properly then they cannot contract well.  Complex stuff, huh?

As you hopefully can appreciate, its not as straightforward as just breathing in and out.  There is such complexity with breathwork and a lot of times we can see a pathology that ultimately stems from poor breathing patterns.  For example, we see deficits in lumbopelvic stability (ie- pain in piriformis, gluts, low back, hamstring, etc) after squatting and deadlifts due to loading issues that ultimately stem from poor breathwork.   Just as we want to train and condition the bicep, the glut, and other areas we also don’t want to neglect breathing.   Feel free to reach out to Ashley at Smith Physical Therapy and Running Academy for additional insight into this.

Ashley Dougvillo joined Smith Physical Therapy and Running Academy in 2019. She graduated from Marquette University in Milwaukee, WI in 2008, receiving her Bachelor of Science degree with a concentration in Biomedical Sciences. She then went on to attend Northwestern University in Chicago, IL to complete her Doctorate of Physical Therapy in 2010. She is a Certified Manual Therapist and has additionally obtained specialty certifications in the Pose Method of running, kinesiotaping, FMS/SFMA, ASTYM, and Women's Health.

Let’s talk about some easy steps to help runners

Hurdles are a great way to work on strength and ti

To be a good runner, you have to do more than run.